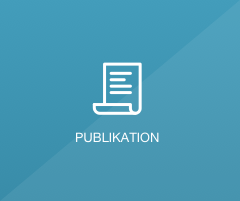 OBJECTIVE: Estimates of cancer risk and the effects of surveillance in Lynch syndrome have been subject to bias, partly through reliance on retrospective studies. We sought to establish more robust estimates in patients undergoing prospective cancer surveillance.

DESIGN: We undertook a multicentre study of patients carrying Lynch syndrome-associated mutations affecting MLH1, MSH2, MSH6  or PMS2. Standardised information on surveillance, cancers and outcomes were collated in an Oracle relational database and analysed by age, sex and mutated gene.

RESULTS: 1942 mutation carriers without previous cancer had follow-up including colonoscopic surveillance for 13 782 observation years. 314 patients developed cancer, mostly colorectal (n=151), endometrial (n=72) and ovarian (n=19). Cancers were detected from 25 years onwards in MLH1 and MSH2 mutation carriers, and from about 40 years in MSH6 and PMS2 carriers. Among first cancer detected in each patient the colorectal cancer cumulative incidences at 70 years  by gene were 46%, 35%, 20% and 10% for MLH1, MSH2, MSH6 and PMS2 mutation carriers, respectively. The equivalent cumulative incidences for endometrial cancer were 34%, 51%, 49% and 24%; and for ovarian cancer 11%, 15%, 0% and 0%. Ten-year crude survival was 87% after any cancer, 91% if the first cancer was colorectal, 98% if endometrial and 89% if ovarian.

CONCLUSIONS: The four Lynch syndrome-associated genes had different penetrance and expression. Colorectal cancer occurred frequently despite colonoscopic surveillance but resulted in few  deaths. Using our data, a website has been established at http://LScarisk.org enabling calculation of cumulative cancer risks as an aid to genetic counselling  in Lynch syndrome. 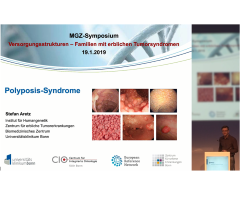 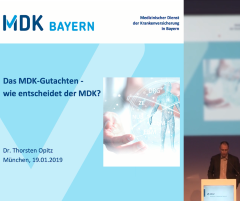 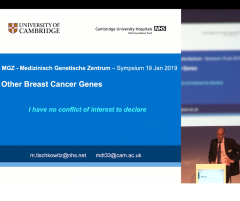 Publikation
Maternal variants in NLRP and other maternal effect proteins are 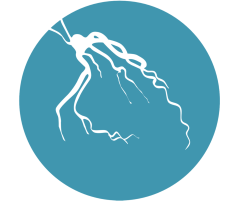 Publikation
A de novo 1q23.3-q24.2 deletion combined with a GORAB 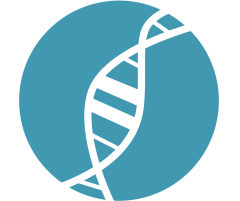